Fall, the last quarter, and my favorite time of the year is upon us. The weather drops, heralding the break-neck ride into the holiday season where good cheer, germs, and the almighty dollar are scattered with reckless abandon. This year as we head into October, I’d like to toss y’all some stale bread crumbs leading to some new work:

Thanks for sticking with me through the flash flood of news. There’s much more to come, with a herd of rehabilitated short stories and poems released into the wild, as well as developments on the novel, and projects in the works. So come on back and be sure to also follow me on Twitter @AJSchumacherart for nuggets of gold, profanity, and self-indulgent profundities.

Just a quick update this time around, giving a bit of a recap on my reading at the XL Publichouse last Saturday, September 12th.

A decent sized, mostly attentive crowd indulged me through about an hour and a half of poetry. The craft beer served by the bar is strong, so I’m certain liberal imbibing played at least a small role in the response from those in attendance. When all was said and done, 21 poems—mostly in prose format—were served up hot and steaming. A few generous souls took pity and treated me to a drink. By the last poem I’m not certain whether or not I was even speaking English anymore, but everyone seemed entertained, if nothing else. I couldn’t ask for anything more. 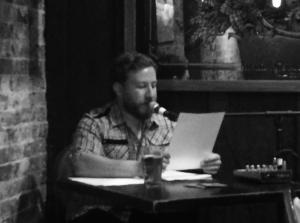 There are some bad ass announcements coming early next month. No bullshit, there’s some cool things in the works. C’mon back in October for the scoop, y’hear?

Here we are, folks, already in the 9th month of 2015. I don’t know about you, but it’s been a god-damn whirlwind for me!

For this go-round I just wanted to share a couple of quick updates.

More news coming soon-ish on short stories, poems, and the novel. Until then, check out some of my words, and have a great Labor Day weekend! I’ll be downing a few and hope you will be too.

Salud and bottoms up!