Alex Schumacher is an author/illustrator who has worked with Arcana Studios, Viper Comics, and DreamWorks TV. His first collection of literary magazine comics, Defiling the Literati, was released in 2017 to rave reviews. That same year Alex was also nominated for a ‘Best of the Net’ award for his graphic narrative collaboration with underground poet John Bennett.

Alex produced the weekly webcomic Decades of (in)Experience for Antix Press from October 2015 – January 2021 and the monthly misadventures of Mr. Butterchips for Drunk Monkeys Magazine from April 2016 – March 2021. A collection of the latter was released in July 2020 by SLG Publishing, and the indie comics luminaries relaunched the webcomic for a new era on May 5th, 2021.

Alex is represented by Allison Hellegers of Stimola Literary Studio. 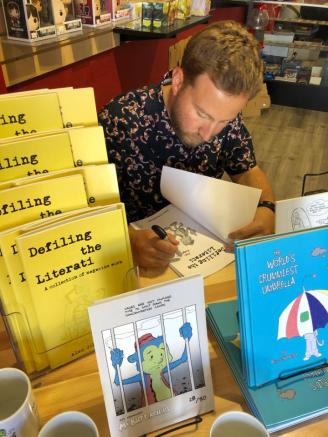