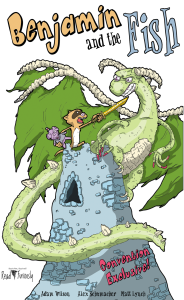 Adventure is just around the corner… Or sometimes behind the bookshelf.

Writer Adam Wilson and artist Alex Schumacher brought this book to life in 2011 revolving around the adventures of Benjamin the lovable little ferret with the heart of gold, and his loyal companion, Mr. Fish. From the wild ocean under the sink, to the magical kingdom behind the bookself, these two adventurers discover all the exciting worlds hidden where you’d least expect them.

Originally published in a small run by 215Ink, the book was acquired and re-released by Read Furiously in 2016. Packaged for a new audience, our heroes were placed in a completely interactive comic book! Readers can color the pages themselves, draw their own comic strips, and try their hands at some of the fun puzzles and games to help our Benjamin and Mr. Fish on their journey.

Pick up a copy for the child, or child-at-heart, in your life on the Read Furiously website.