Skip to content
October 11, 2013October 11, 2013 Alex Schumacher
The Alternative Press Expo (APE) returns to the Concourse Exhibition Center in San Francisco this weekend October 12th and 13th to celebrate its 20th annual event. One of the leading alternative and self-published comics events in the country, APE was started in 1994 by Dan Vado, the head of SLG Publishing. I have been many times to this wonderful convention and for the past couple years have even conducted workshops on collaborating and networking. This year I will be exhibiting with the awesome Bridgett Spicer!
I will be selling copies of the “Unemployment Adventures of Aqualung”* which I co-wrote and drew for Arcana Studios, “Fame: Tom Daley” which I drew for Bluewater Productions, a sixteen page teaser for CW Cooke’s and my upcoming series “The Guitarist” and some of my illustrated children’s poetry cards (all pictured below). Come on by and see Bridgett and me at table 832B from 11-7 on Saturday and 11-5 on Sunday! See you at APE! 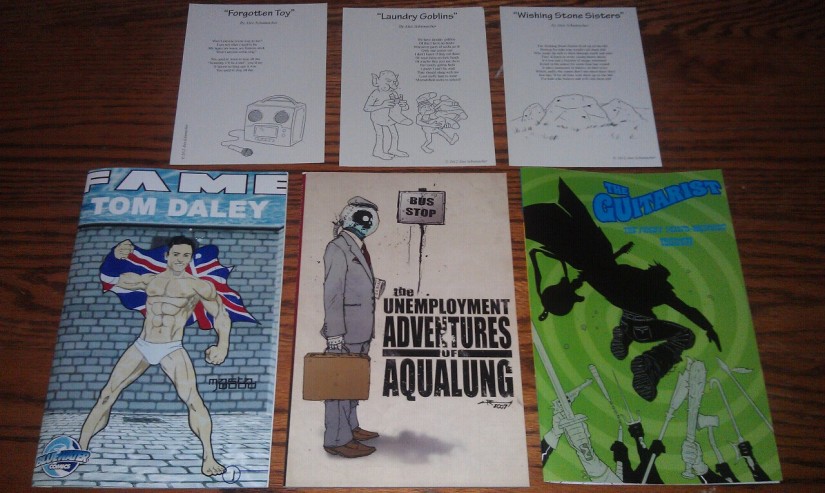 For more information visit http://www.comic-con.org/ape.
*Due to unforeseen shipping delays I may only have a few copies of “Unemployment Adventures of Aqualung” but am currently working to remedy the situation.