Greetings, wayward denizens of the interwebs!

2020 has arrived and, despite my enduring disappointment with the absence of hoverboards and flying automobiles (thanks Bob Gale!), I continue to forge ahead. Please do not take my lack of updates as anything more than life happening. If you follow me on any other social media platform you’ll already know I have certainly remained productive, which has been somewhat of a chore considering these dark geopolitical times and my wife and I finding ourselves smack dab in the middle of relocating back to the Bay Area. Presented herein are some highlights which occurred over the last few months of blog inactivity.

COMICS FOR THE APOCALYPSE

In late November 2019, I was introduced to the lovely English chap Samuel George London through my good pal Aaron Iara of Effective Nerd. Samuel was nothing short of welcoming and convivial from the get-go. Following a brief email exchange, Samuel and I were able to schedule an interview to accommodate our significant time difference. In the early morning hours (for me) of a weekday morning in late November 2019, Samuel and I engaged in an engrossing chat revolving around my work and which fastidiously chosen comics I would bring along in the event of a cataclysmic asteroid collision—hence the title of his podcast. The episode was posted on December 16th and can be listened to in its entirety on the Comics For The Apocalypse soundcloud. Thanks again to Samuel for having me on the show!

Defiling the Literati closed out 2019 with a laudatory review from Christa Harader, aka Knowledgeable Cabbage. Christa was accommodating enough to fit my collection of magazine comics into their already jam-packed review schedule. Christa’s favorable write-up was greatly appreciated and can be read in full by visiting their website. Here’s a taste of what Christa had to say about Defiling the Literati.

Overall, “Defiling the Literati” works well as a collection of work and an anthology of high-quality pieces. Schumacher’s work carries an acidic bitterness born not of cynicism, but frustrated optimism, and the effect is inspirational as well as entertaining in its own right.

The book is currently for sale in my store and, for a limited time, offered with free shipping. If you’ve vacillating between whether or not to buy yourself a copy, now would be the optimal time to do so.

Creatively, the new year was christened with the publication of a highly personal examination of my sordid history with—and current attempts to recover from—alcohol abuse. Moonchild Magazine kindly indulged me and agreed to include the piece in their 6th issue entitled, “We Are Not Broken”. A Sobering Reflection was unleashed upon the world as of 01/2020 and the comic is available to read online for free. Gargantuan amounts of gratitude to Editor-in-Cheif and beautiful soul Nadia Gerassimenko for the encouragement and support throughout this process. Below is an excerpt from the 3-page graphic essay.

I have been teasing the release of the Mr. Butterchips book for some time, but I assure you this compendium draws closer and closer to an actual release date. The most I can divulge at this time is that the collection will be comprised of the first 42 individual comic strips, a 22-page standalone story you will not be able to read anywhere else, a few pin-ups from professional friends, and a surprise foreword. Look for an official announcement soon.

Decades of (in)Experience reached its watershed 200th episode on Friday, 2/21/2020. When Francis Lombard and I embarked on this journey together in October of 2015, I don’t believe either one of us had any preconceived notions as to how long the series would last. Our mindset was simply to break free from the bondage of expectation and tell an engaging, relatable story unencumbered by any particular fad or popular genre. I cannot express how much Francis and I appreciate the encouragement and support garnered over the last 4 years and change. Speaking of support, several comics outlets generously lent their platforms to help Antix Press and I get the word out about this milestone episode:

Adrian Has Issues: Initially interviewed by Adrian in 2017, he once again chose to subject himself to nearly an hour of my jibber-jabber. Listen to our conversation about Decades, authenticity, and peanut butter cups in the episode he titled Gen-X Sisyphus.

Spoiler Country: Following a false start due to technical difficulties, Spoiler Country’s “man on the street” Casey Allen and I had a spirited conversation regarding the history of the webcomic and what readers may expect next.

Bleeding Cool: The lovely Lauren Sisselman of Bleeding Cool is a stalwart supporter of indie creators, having even written previously about Decades and Defiling the Literati. In her latest article, Lauren cordially assisted in our efforts to commemorate this particular landmark.

**An interview conducted by Fanbase Press will also be available to read as of March 12, 2020. 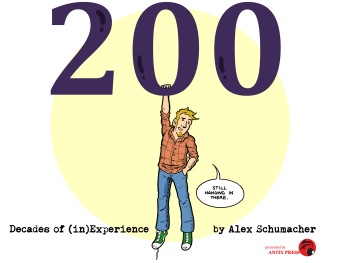 As mentioned before, my wife and I are in the midst of relocating. With moving comes all of the necessary preparations such as packing and cleaning. In regards to the latter, I will be selling some original pages in an effort to lighten my load and possibly offset some of the costs moving tends to incur. Available pages come from such books as Benjamin & The Fish (215 Ink, 2011 & Read Furiously, 2016), The Unemployment Adventures of Aqualung (Arcana Studios, 2013), Fame: Tom Daly (Bluewater Productions, 2013), and select pieces from Decades of (in)Experience and Mr. Butterchips.

I’m just getting warmed up. This year promises to deliver new artwork, continued stories documenting the human condition, and with any luck, some BIG announcements. Beware the Ides, and talk at you all soon!

Well, I obviously neglected a few months worth of blogging towards the end of 2018. Going forward I will be using this blog solely for major announcements and appearances. I tend to post far more frequent updates on my Instagram account, so be sure to follow me there.

If you’re looking for updates regarding my work with a side of social and political commentary you can follow me on Twitter as well. Anyway, here’s a rundown of the insanity which transpired between August and December of last year. Buckle up, kiddos, it’s quite the missive coming your way…

For the Marin Comics Fest kickoff, I had the pleasure of spending an afternoon at the new location for the Cartoon Art Museum with my pals Ron Evans (founder of the festival) and Lex Fajardo. Thanks to everyone who stopped by, including my cousins from the North Bay! 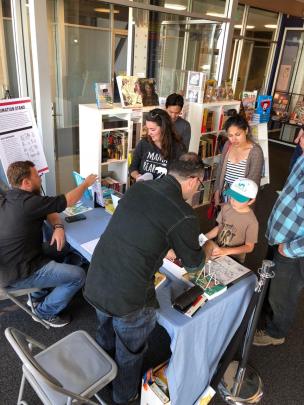 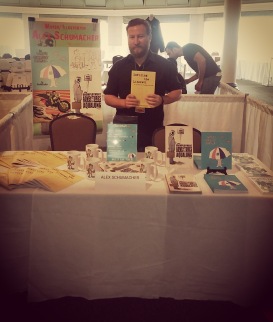 On November 29th the Effective Nerd, run by one Aaron Iara, published a glowing review of DECADES OF (in)EXPERIENCE. Below is one of my favorite excerpts from Aaron. The full write-up can be read here!

Schumacher’s writing is poetic. Every line packs a punch.The dry wit paired with brutal introspection leave Luke with a personality of optimistic hopelessness. I know this is oxymoronic, but cognitive dissonance will do that to a person. The potency of these feelings is a testament to Schumacher’s writing style.

Speaking of DECADES OF (in)EXPERIENCE, year 3 wrapped on December 14th, 2018. Antix Press and I could not have come this far without the unwavering love and support of our readers so a resounding thank you to each and every one of you who takes the time to show up for the comic every Friday! Luke Carlin’s misadventures return next Friday, 01/18/2019.

On November 30th, COMICON published my first exposé for their website as a response to the Twitter tirade posted by Erik Larsen (Savage Dragon) early in 2018 in which he asserted that “there are very, very few outstanding talents out there who aren’t already working (in the comics industry).” Thanks to Hannah Means-Shannon for her guidance and allowing me to say my piece. Read the article here!

Along with DECADES OF (in)EXPERIENCE, the final MR. BUTTERCHIPS of 2018 also debuted in December with the release of Drunk Monkey‘s year-end issue on 12/03/2018. Check out the alt-right obliterating installment here.

Last, but certainly not least, to cap off an incredibly busy and productive year I exhibited at the 3rd annual Salinas Valley Comic Con. I also has the distinct privilege of speaking on a panel about querying literary agents with new pal and fantasy/steampunk author Angelique S. Anderson. This show only continues to expand and I can hardly wait to see what the attendance may be in 2019! Thanks to everyone who stopped by the table and picked up some books. 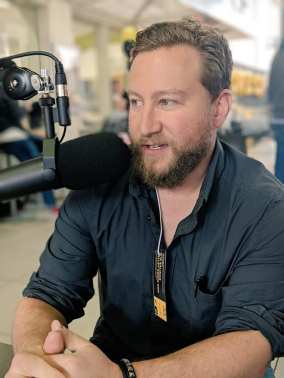 Whew! We made it, folks. Thanks for hanging in there. I have so much in store for 2019 so I do hope you’ll continue to follow my creative exploits and help me spread the word about my work like an artistic venereal disease. Hope everyone enjoyed the holidays and I’ll see you at a show (or at least an internet-capable device) near you soon!