Fair morrow (or evening I suppose, depending on which time zone you call home), peeps! I’ve extricated myself from the drafting table long enough to post another update here on the ole’ website. Not only has the pace of projects refused to abate, I now find myself entangled with a couple of secret (though fucking stellar) projects. Seriously, I’m gnawing off my toenails in anticipation of announcing the aforementioned ventures. In all fairness there’s no way to predict when—or even if—said endeavors will come to fruition, so I suppose they may not have been worth mentioning just yet. Oh well. I’ll simply dangle the carrots and watch you shiver with anticipation.

Anyway, the 3rd year of DECADES OF (in)EXPERIENCE continues to barrel forth. Switching to a full page format has certainly been a bit of an undertaking, but it has presented a worthy challenge for my writing and art. Your, the reader’s/fan’s, input is always welcome. Drop me or my publisher Antix Press a line to let us know what you think of this year thus far. If you haven’t as of yet found your way to our dark, licentious corner of the ‘web and needed some prodding, feel free to peruse this article from Bleeding Cool. My debt of gratitude to the wondrous and shiny Lauren Sisselman for the coverage!

That ornery organ grinder monkey, MR. BUTTERCHIPS, also continues his campaign of intellect and snark against the alt-right, gun lobby, homophobes, and stupidity/intolerance in general. His monthly antics can still be found with every new issue of the best damn independent literary magazine in the city of angels, Drunk Monkeys! The magazine is also attempting to become a paying market, so if you can swing a few bucks their way to include more content (and possibly increased installments of MR. BUTTERCHIPS) visit: http://www.drunkmonkeys.us/. 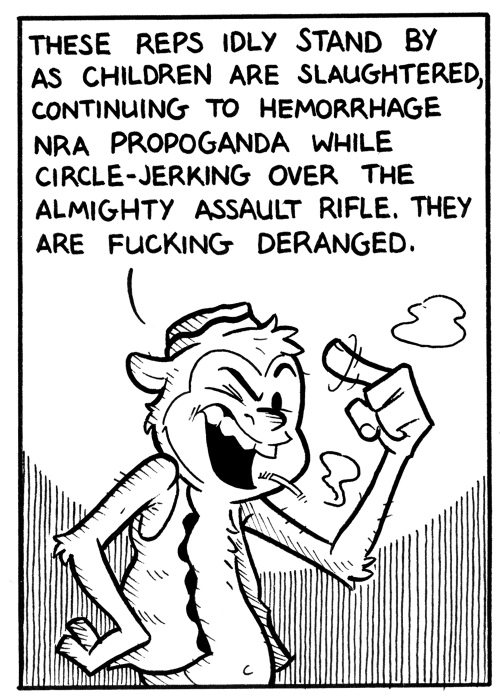 As stated in my previous post, THE GUITARIST, created by C.W. Cooke and myself (with colors by Jeremy Kahn) will be serialized in Antarctic Press‘ revamped Mangazine beginning in July! This is such a treat for us as we’ve wanted to paint the world with this epic comic’s shade of psychedelic since we conceived this rock and roll saga years ago. Preorder your copy here, and/or contact your local comic book shop to request they stock the anthology. Here’s a sneak peek at the cover:

As for the above referenced secret projects, I can only say that there may be a new graphic novel and picture book in the works. That is all I can can reveal. That is all I will reveal. In the meantime,allow your imaginations to roam freely. Will the new graphic novel be a sci-fi erotica? Can the new picture book possibly feature a shroom-dropping goblin? Probably not as those sound like agonizing reads, but I still invite you to speculate away. Once news is available I will post all the grungy details here. Or on Twitter. Or my Instagram. If interested, you can follow me on either of those social media sites @AJSchumacherart.

For now, I bid you all a fond adieu. These god-damn panels won’t materialize on their. I wish they did, believe me.

P.S. Don’t forget to shower your mothers with praise and love for bringing your sorry asses into the world this weekend!

In the event you may have missed the news, THE GUITARIST (created by C.W. Cooke and myself), has been selected to be serialized in Antarctic Press‘ revitalized MANGAzine. The first section will appear in MANGAzine #1 debuting in July 2018 at none other than San Diego Comic Con.

Thanks to Ben Dunn for bringing us on board and to everyone who supported us along the way! Here’s the official announcement drawn by yours truly and colored by our own Jeremy Kahn.

It’s spring again, folks. That time of year which brings new life, gentle rains, and god-damn miserable allergies. My nose has been a geyser of green and yellow, and my melon has been stuffed with cotton. Lord knows I struggle enough with thinking as is so this is just a cruel trick of Mother Nature. What a bitch. Regardless, I have continued to chug along at a steady clip in my writing and cartooning efforts. I refuse to be bested by an unyielding case of the boogers!

My short story Rock the Cash Bar, originally published by Drunk Monkeys on October 5, 2015 has been included in their recently released ‘best of 2015’ anthology. 106 pages of “the best fiction and poetry featured over the past year in the online literary journal Drunk Monkeys. Featuring fiction from Bud Smith and Gessy Alvarez and poetry from Kevin Ridgeway, Frankie Met, William Lessard. Plus essays on Star Wars, illustrations, the Donald Trump campaign speech generator, and much more!”* Grab yourself a copy here.

Speaking of Drunk Monkeys lit mag, I was recently commissioned by their Editor-in-chief (and all around snazzy dude) Matthew Guerruckey to produce some cartoon illustrations for their Star Wars retrospective. To be released in May, the retrospective will include essays, commentary, and poetry relating to that galaxy far, far away we all know and love. My work featuring intoxicated and stoned simians will adorn the cover and serve as dividers to the various sections relating to the original trilogy, prequels, and sequels. Here’s a taste of the cover, colored by Allan Ferguson. 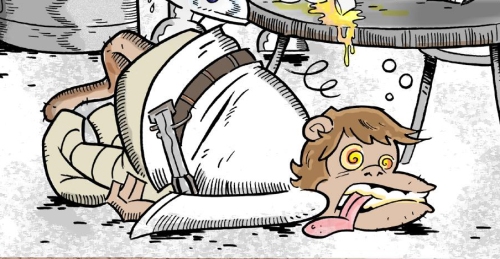 In graphic novel news, The Guitarist is gearing up for it’s Kickstarter campaign to be launched by our publisher, Under Belly Comics, in late April/early May.  The pages are coming along and I can’t wait to share all of the psychedelic, drug-fueled, bat-shit craziness that this book has in store for all of you! It’s going to be one kick-ass rock ‘n’ roll ride to be sure.

Decades of (in)Experience will be hitting the six month mark in April! Every Friday for the past six months I have somehow managed to find new ways to fuck with our main man Luke Carlin and hopefully provide you with a chuckle or two along the way. Decades’ online champion Antix Press and I have been hard at work to bring you a collected print edition of the comic/illustrated narrative’s run thus far by trying to find a publisher/distributor for the title. We will be braving some upcoming meetings, including the possibility of a safari to the wilds of San Diego Comic Con, putting our lives in peril all in the name of pleasing our audience with dirty entertainment. Look here for future news and updates and a HUGE god-damn thank you to all who have been reading and/or helping to promote Decades of (in)Experience!

My tough love writing column for Five 2 One Magazine, Bread Crumbs form the Void will be releasing it’s eighth column full of hard-nosed advice this Wednesday March 30th. 2016. There is some other cool shit in the works with Five 2 One Magazine, and it may be that the column shifts to a bi-weekly schedule in the near future. I’m not at liberty to divulge too much info at this juncture, but suffice to say if all goes according to plan you will see some cartoon-based content both on their website and in their print issues in the very near future. Keep your fingers, eyes, tits, balls, and whatever crossed. I could use the good vibes…

While we are on the subject of new cartoons published by Five 2 One Magazine, their resident literary outlaw/Editor-in-chief Nathan Schwartz and I felt it fitting to unleash what we are calling an Easter Fucking Funny on the world this Easter day. So, enjoy the doodle and have a merry bunny-who-shits-eggs day!

This week I am the guest on the killer comics podcast, Comic Exposure! I chat with them all about current and upcoming projects. If you’d like to hear me prattle on about writing and drawing you can find the interview on their website. Adios until next time…

2015 is off to a roaring start, hence the lack of updates. There’s a lot of exciting things in the works and, while there are some I am not at liberty to divulge too much information, here’s a rundown of what I can share.

The Guitarist kickstarter will (hopefully) be coming your way next month from the good people at Under Belly Comics. CW Cooke and I have been wanting to share this story with everyone for some time and have now been lucky enough to find a publisher who is not only willing to distribute this crazy book, but allowing us to do it our own demented way. Maybe they’re insane. Along with our talented colorist Jeremy Kahn, we’re looking forward to bringing this tale of epic madness to you later this year. Here’s a sample page : 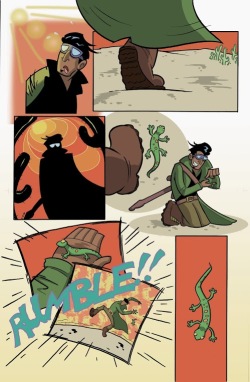 Recently my time has been occupied by storyboarding thanks to my agent and the very cool DreamWorks TV (yes, that DreamWorks). I was hired to board an episode entitled Wish Delivery of their series Astrid Strudelman: The Unicorn Whisperer, created by Thessaly Lerner, aka The Ukulady, with animation by Will Guy. They’ve been fun to work with and it’s been a killer experience so far! I’ll be sure to update when I have more information as to when the episode will air. Without giving away too much of the story, here’s a look at some of the work in progress.

There are also a ton of short stories in the works, some being pitched to literary magazines and journals, as well as a novel being developed. Excerpts from both may be posted soon on the writing page, so keep an eye out.

That’s all for now, folks! Hope everyone else out there is having a great 2015 so far as well.

Very merry greetings to all! I do hope your holiday season is great so far, and would just like to take the time on this stormy winter day to give everyone an update on projects of mine to look out for in the new year.

My new picture book, and follow up to The World’s Crummiest Umbrella, is in production now. It will be published by Wandering in the Words press and is tentatively slated for a spring 2015 release. Without divulging too much of the story, I wanted to share a peek of the main character from this whimsical little tale. Here is a quick sketch from my collection of character designs and story notes: 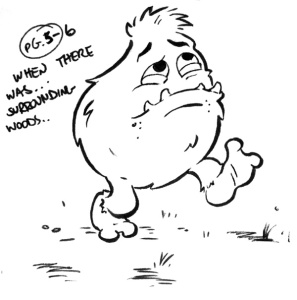 As shared in a previous post, Under Belly Comics has picked up The Guitarist, the new graphic novel series from CW Cooke and myself. The story and artwork are currently undergoing some cosmetic overhauls as we put together the rest of our creative team. Check back here often for production art and updated on release information. This is going to be one wild ride, and to whet your whistle, here’s a teaser image brought to you with backgrounds by colorist Melch Valimento.

There are also some exciting developments which have occurred recently in the animation industry. Unfortunately there isn’t much that I can share as of now, but I’ll reveal that there are some series pitches submitted to networks as well as other opportunities which have presented themselves that may serve as entrance into the field. Hopefully there will be more to share in the new year, so for now, send your good vibrations my way and think happy thoughts.

2015 is going to be one exciting year! Happy holidays y’all!