I blinked and now we’re nearly through August and past the halfway mark for 2018. I’m dazed, stunned, nauseated, deflated, and surprisingly tenacious amidst a few months of breakneck ups and downs. I’ll spare you the details in an effort for brevity which may have some of you thanking whichever deity you subscribe to for the absence of my typical introductory verbosity. There’s simply too much to get through to muddle the post with a meandering salutation. Buckle the fuck up, because off we go!

One week from today join us for the Marin Comics Fest Kick Off with Lex Fajardo and Alex Schumacher at the Cartoon Art Museum! Alexis Fajardo and I will be signing books and discussing our work from 2 to 4 p.m., in the Bil Keane Family Lobby. Admission for this event is free.

For more information and to see a complete schedule of events with talents such as Paige Braddock, Judd Winick, Brian Fies, and Nomi Kane, visit marincomicsfest.org. The Marin Comics Fest is sponsored by the libraries of Marin County and the Cartoon Art Museum.

Next, I wanted to get some bad news out of the way. Though CW Cooke and I were scheduled to publish our saga THE GUITARIST through Antarctic Press beginning this summer it is no longer to be. We’ll simply chalk it up to creative differences as neither CW or myself saw eye-to-eye with the editor with whom we were set to work. Fret not, fair enthusiasts, for our indomitable—or at the very least pertinacious—spirits drive us to continue our search for a suitable home for this little comic that could. If and when news breaks of us striking a deal, rest assured the announcement will be here posthaste.

Now in it’s third year, DECADES OF (in)EXPERIENCE continues to stampede across the webcomic landscape in its signature whiplash weekly lurches. If you haven’t had the time to follow each and every installment my publisher Antix Press has corralled all entries produced thus far om the archive of apathy site. Feel free to catch up there at your leisure and be sure to bring a friend along to share the depraved wealth! Should further prodding or proof of virtue be necessary you can read a glowing review of the feature from none other than Bleeding Cool here.

This past May I was also invited to provide the cover illustration for the underground punk rock literary magazine Paper and Ink. The 13th installment, Tales From The Bar Side, is brimming with yarns spun about the denizens of “dive bars, shitty pubs, and back alley boozers.” Publisher and editor-in-chief Martin Appleby believed I was the apposite choice to supply artwork. I can’t begin to fathom why. Nab yourself a copy of the May issue (as well as their entire catalog while you’re at it) by visiting their store at https://www.etsy.co/shop/PaperAndInkZine.

Finally, in October I will be one of the guests during the Central Coast Pop Expo held this year at the Santa Cruz Beach Boardwalk. The convention will take place over the weekend of October 20th and 21st, celebrating all areas of pop culture including comics, movies, television, gaming, cosplay and more! Despite my association the event promises to be a family friendly affair. I will do my utmost to refrain from hurling feces, verbal or otherwise, though I can make no such promises for my fellow guests Ace Continuado (Dark Horse, Zenoscope) and Ray Zepeda, Jr. (Tragic Hero Comics Publishing).

Secure your tickets now by visiting https://www.ccpopexpo.com/tickets/. See you there! 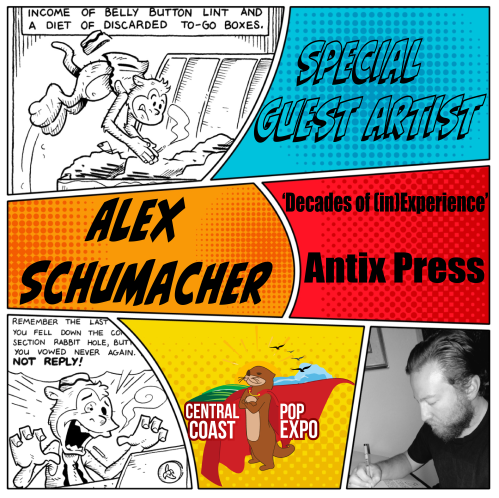 Alright, kiddies. That about does it for now. I hope to meet some of you out there in the analog world. Others of you, not so much. Hope everyone’s summer has been a blast. Peace!