Howdy kids and welcome back to another woefully delayed update on this site’s blog. To be fair I have been fucking crazed these past few weeks wrapping up some projects, beginning others, drinking due to the upcoming horror show of an election, etc. Anyway, before I disappear into veritable artist hibernation to complete the pitch on my new graphic novel for my agent I wanted to update my 3 loyal readers on current goings-on.

October kicked off with a god-damn explosion courtesy of the fantastic folks over at Drunk Monkeys. This month’s issue was dedicated to the current election cycle, spotlighting the absolute absurdity of this nation’s deteriorated political landscape which has allowed a fucking xenophobic, misogynistic buffoon to have a leg in the race. When asked to produce the cover for the collection of essays and poems I scratched out several concepts before settling on an image which I thought summed up the overall lunacy of the campaigns tactical approaches. 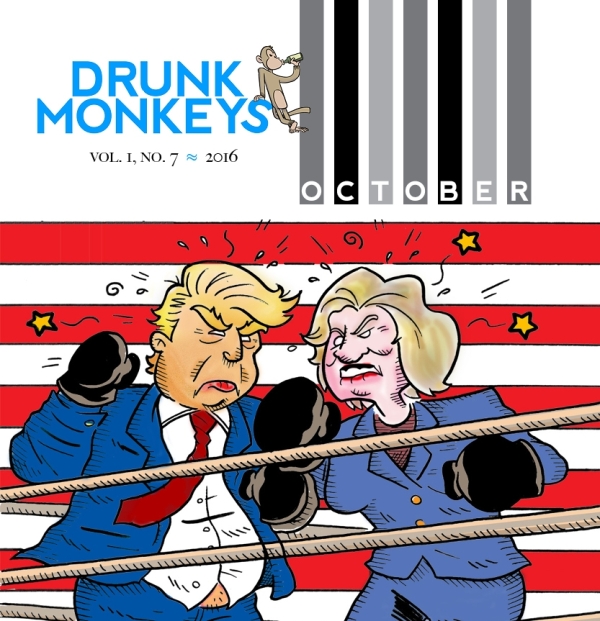 The full version, as well as excerpts from the issue, can be viewed on Amazon where you can also purchase the stellar magazine! Amongst impressive missives by my writing cohorts Kim Bailey Deal, Gabriel Richard, Charles Joseph, and Editor-in-Chief Matthew Guerruckey you will also find the latest misadventure of that sick little monkey MR. BUTTERCHIPS. Check out the preview below and find out how it concludes only at Drunk Monkeys!

As of Friday October 21st my weekly DECADES OF (in)EXPERIENCE wrapped it’s first year of publication with Antix Press! An entire year of wrong turns and sharp lefts provided by our fallible anti-hero Luke Carlin. Antix Press and I will be taking the remainder of the year off, but plan to return on January 6th 2017 full of piss and vinegar. Read the final episode here and stay tuned for news and possibly a special feature in the next few weeks.

It was also recently announced that I will be a guest at December’s Salinas Valley Comic Con alongside cartoonists Bridgett Spicer, Betsy Streeter, and the Cartoon Art Museum’s own Andrew Farago. I will be sitting on a panel or two and possibly teaching a workshop on graphic novels… or writing… or how to create whilst drunk. For more details and updates visit the official facebook page here. 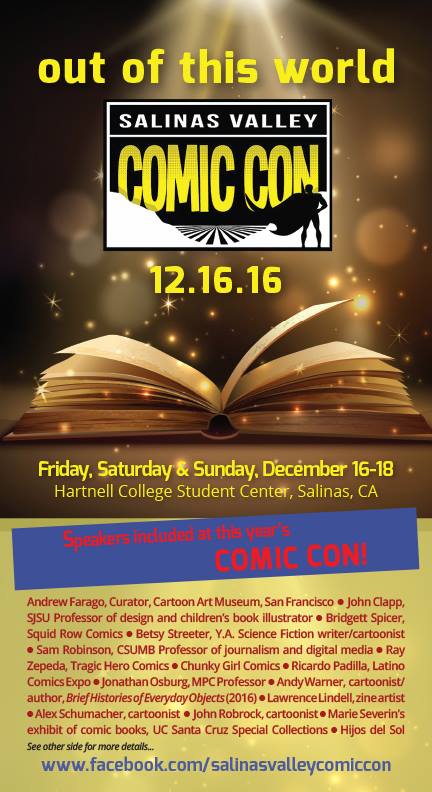 Now my dearest degenerates I will be taking my leave and burying my head in a pile of Word docs and artwork drenched in my own blood and entrails. The coffee is hot, the whiskey is on deck for this evening, and I am off to the races on the graphic novel track. I will make a concerted effort to update again before the holidays send the rest of my year into a 90 degree free-fall, but if I don’t quite accomplish said goal I’ll see you all on the other side of 2016. You’ll recognize me as the belligerent drunk covered in ink.